Now it's there, Now it's not: How to remove Crayon marks from walls.

For some reason, even though I am painfully aware of the pen scribbles Little Miss has made on the wall between the computer table and TV, I had so far been oblivious of the huge patch of Crayon scribbles she made on the wall right behind the living room couch. I can imagine we never saw it as we're facing away from that wall most of the time while watching TV or just sitting around (that couch IS terribly comfortable!).


Mr. Ozturk and I had a fun conversation discussing the merits of Mr. Clean Magic Eraser for cleaning the said crayon patch. I wanted to get to it, get the Eraser and clean out the scribbles before our friends came over. He wanted me to do "research" before buying the said eraser for eight bucks. I argued there are multiple erasers in one box and we'd need more anyway because well, frankly, this is not going to be the last time Little Miss practices her art on our walls. He argued that there must be other ways less expensive to do the same purpose.

Entre eHow and the 12,000 replies to the article that basically instructed to make the artists clean the walls with a damp towel and a lot of elbow grease. Although I agreed with the suggestion and was wondering how to make a 19 month old child commit to removing her art from my walls, a reply to the article seemed like it would work.


So I grabbed our $10 Neem toothpaste tube, a dry towel and a damp towel and settled for the job. 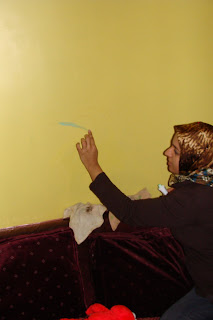 Applying the green toothpaste direct over the Crayon marks 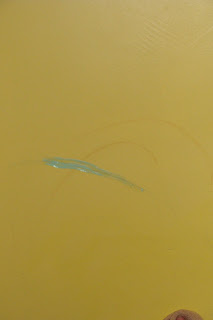 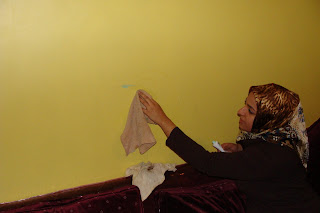 Scrub off with a towel. 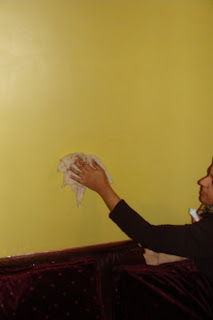 Wipe with a damp towel, and YES! They really are gone!

I still think the Magic Eraser would have been a quicker albiet slightly more expensive solution, but this works very well in a pinch. Any house with a toddler with the tendency to run amock with a handful of crayons would find this very useful. Although, using a cheaper toothpaste might be a better idea.