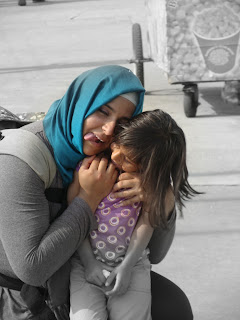 Every time I head out in the world, I am always on the look out for that one moment in time captured in a photograph that can sum up my life. I have yet to find that one image that will contain my life inside a frame...

I am not even sure if it is probable. My life has been so complicated from the very beginning. I used to think my early years were probably incident free but came to realize that they still had a great impact on my adolescent years. There is a 6 year old hiding in my heart and she remembers everything.

Perhaps, it is merely wishful thinking...wanting to go back to those days when we were living our life not aware of how it will change our future. Had I known about my future, I might have stared at a neighbor's garden a little bit longer, committed to memory the feeling of stealing falsay from a tree a little bit harder. I would have asked another question or two, I would have acted to certain people differently. More kindly.

Had I known. Had I known my life will be so interesting in the future, I would have felt better about the mundane little things that brought me down.

I confess, it will be a hard task to find an image that will sum my life in a photograph. Yet, I keep on searching... for me it's the journey that is the adventure, not the destination.
Posted by Ayesha at 4:37 AM 4 comments: 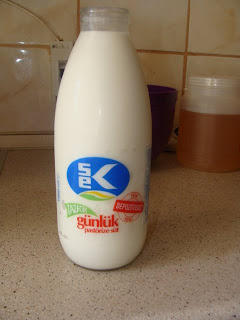 Sure, I have some recent unforgettable moments too, like the one with Wizard's sister in law showed me her milk cabinet filled to the brim with packaged milk. I naively asked her "Won't it all go bad? Why isn't it in the fridge?" As if I've never seen UHT treated milk before. *Sigh* It was becoming a fad as I left Pakistan in the fall of 2003 and we did prefer it over unpasteurized milk because our milk man kept trying to keep the traveling milk cool by melting ice blocks in the milk cans....ice blocks that had been sitting next to horses and their copious dung!

(Side bar: When we moved to Lahore from Karachi in the summer of 1997, my brother wondered why his hair was turning a slight shade of green by each evening. A kind cousin explained it was the dried horse dung hanging in the air over Mall Road.)

To be honest, I'm not convinced that UHT treated milk is good for human consumption. I'm of the times when unpasteurized milk was boiled twice and cooled before drinking and that was that. We never got sick, and certainly were not lactose intolerant. I do remember the first few times we started drinking Haleeb Milk (Pakistan's UHT treated milk brand), yes, it caused a number of issues with too many bathroom trips afterwards. I never really connected the two.

All I know is, you can't make yogurt with UHT treated milk and that is cause for concern hahaha.

Edit: Since I started writing this post, I have discovered the existence of unpasteurized milk in Istanbul as well. I'm seriously contemplating switching us all back to that.

I'm curious to what my few readers think. Please share your experience with unpasteurized, pasteurized, and/or UHT treated milk.
Posted by Ayesha at 8:39 AM 2 comments: 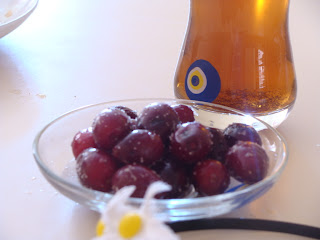 Occasionally, hubby will bring something new from the market and ask me "Did you have this in Pakistan?"

Thank you for rubbing in the wounds my love, no, even if we did I won't remember it because I haven't been back in ages!

This time though, we had an interesting argument. He brought back "Kızılcık," a small berry that grows on trees the height of apple trees. It looks like a cross between cherries and cranberries. My first bite into it, I cringed...it was extremely tart! While I was trying to bring myself back from tart-induced-confusion, Wizards exclaimed "I KNEW you'd like it!"

I about died from the possibly poisonous berry and what part of my flailing for water and gacking into the sink did I look like I enjoyed it?

"Oh you ate the unripe one, they still need to sit and ripen a bit."

Why thank you for that important piece of information!

Three days later, I bit into the now darker berry tentatively. There was still a hint of that fruit of death tartness, but it was more pleasant this time. The flesh left my mouth feeling dry and it reminded me of...

Could it be? Have I found jamun in Turkey?

Jamun you see, has some beautiful memories associated with it. It gets harvested from tall trees late summer into the monsoon season. My earliest memory of Jamun happened at our neighbor's home where older girls seasoned the purple berries with salt and pepper. With the jamun in one bowl, and another bowl held over it, they would shake the berries till the salt made some of the juice start leaving the fruit. "To lessen their tartness," they explained.

Most other times I ate jamun, the memories were ruined by the stupid worms creeping out just before we were about to pop the entire thing in our mouths. There were a few times when after finishing off half a bowl of the purple fruit, we'd realize that every berry was in fact compromised and o.m.g. we already ate like half a kilo of worm infested fruit!!!!

Thank fully, the worm prefers to reside not in the flesh of the jamun, but the seed. Or so I like to tell myself every time I remember that god damned (yet extremely tasty) fruit.

To replicate the same memory, I seasoned kızılcık with salt and pepper, shook them till they got watery and inspected for worms.

As I dug into my bowl of jamun-related-but-better berries, I realized, I had found yet another silver lining.
Posted by Ayesha at 1:53 AM No comments: