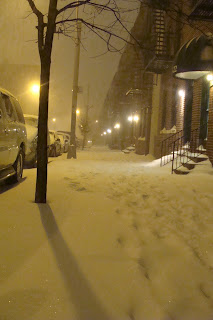 Hey there Mr. Frost!
Mid Atlantic's first snow storm hits the streets. From Washington D.C. to the Hamptons, we're all coated in a at least a couple feet of snow. I love the first fluffy snow banks, untainted by the neighborhood dogs, looking like snow dunes begging to be jumped into. I can only dream of Imran Bhai's vast back yard that must look like a snow-shoeing trail by now. It would be fun to jump off the deck into what I'm imagining to be a pool of powdery snow.
We joined the gleeful neighbors taking their customary late night walks, including one of the half-brained 'pino hicks from Louisiana who casually strolled in with a shovel...wearing a pair of shorts and sneakers. I had to ask him if he just landed from Planet of the Apes 'cuz that'd be the only place that didn't know about the imminent storm. I didn't really ask him that. I already know.
I love how the night lights up with the street lights reflecting off the snow makes it look like a perpetual dusk. Never in a million years would I stay in and not take pictures. I can be North Pole's resident pro photographer, I love snow so much!

And how could I resist an empty snowed in street? 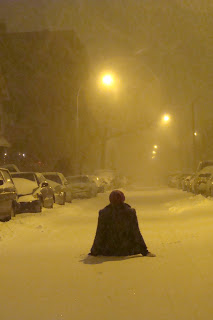