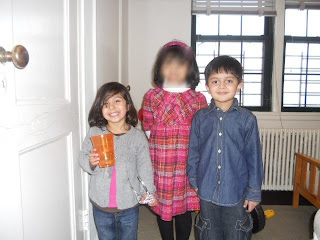 So my lovely friend Wafa decides to make life easier for me and invites us over for her son's birthday (he turned 4!) on the day we were dreading spending all alone due to the impending snow storm/blizzard creeping towards the North East.

It was so exciting! The prospect of hanging out with my cool desi friend (plus some more!) and add to that her cooking and CAKE?! Are the lucky stars shining down on me at the end of this year or what? Armed with a gift (that was a snap to shop for by the way! Shopping for boys' clothes may be a pain in the butt, but much to my delight, I've discovered that shopping for toys for them is a fun filled snap.)

Iza's first question to me when I told her where we're going was "Who is Mus-tafa?"

Of course, when "Mustafa" opened the door she immediately shouted MU-FADA! So apparently, that's the only way she knows him and that's how he shall stay =)

It's the most wonderful time of the year!

Just like Eid is to Pakistan (and other Muslim countries), Christmas is to NYC. Some stores do the wild thing and stay open 24/7 for last minute shoppers, unaware that in a country far away, 24/7 shopping is the norm during Ramadan.

To me, the crowds in NYC are no different, the streets lit with holiday lighting none the brighter that what I grew up seeing in the streets of Karachi, Pakistan. In my own personal mind, when I'm in the middle of NY shoppers and tourists, I'm back in my country during Eid. Which is probably the real reason why I love Christmas time now so much.

We'd tried taking Monster to see the huge tree at Rockefeller Center twice before, once in 2008 and then in 2009. Both times, little miss Routine was fast asleep. 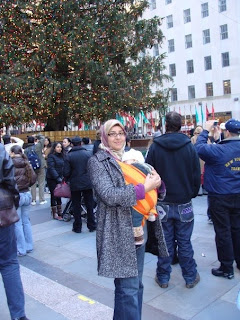 And here, again she's asleep on Wizard's back.

Finally this year, we saw her face light up brighter than the tree when she craned her neck upwards to taken in the giant! 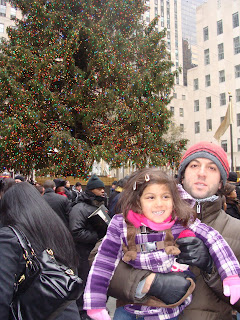 We managed to show her the nutcrackers outside Radio City Hall in 2008 below: 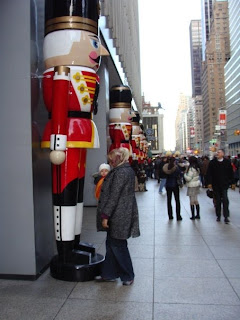 But it was in 2010 she showed any interest in the giant-sized toys: 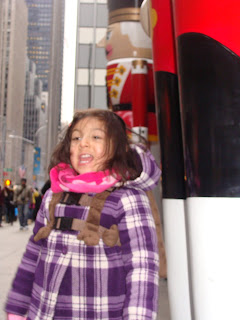 In spite of all that she does to make us tear our hair out and make Wizard go prematurely gray haired, I can't help but fall in love with her and every time she gives me this sweet big smile. 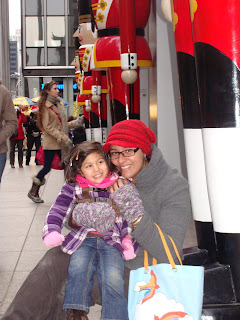 This girl is truly my little super Star! 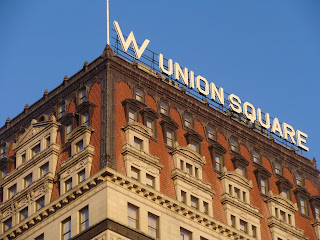 It had to happen one day, right? It is as if with every child you conceive, you are inviting a change in destiny. All that happens next is attached interminably with the destiny of the new person who you're bringing into the world.
We'll make the most of our time left in NYC, memories, pictures, Wizard's funny comments will all be immortalized here. One day we'll look back fondly at these entries.
Friday 24th, 2010 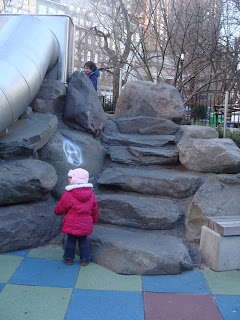 One of the reasons I have always loved NYC is that like us, numerous families bring their children out to play in the playgrounds despite freezing temperatures. The small apartments make it almost a necessity to step out and let the children run around in the cold air to let their wheeby jeebies out.

At the end of the day, we went down our list of most favorite snacks and food available only in NYC, and tonight we decided on paying a visit to *our* cupcake haven...Buttercup Bake Shop. Other people might prefer Magnolia, but we would never brave the lines. 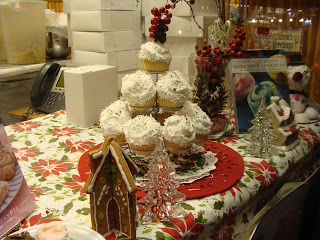 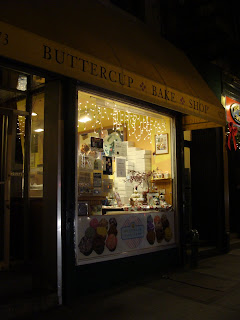 Why must I always...

...get obsessed with evil-natured food?

First it was these that resulted in the end of my continued affair with pre-pregnancy jeans into my sixth month of pregnancy. Now, Smitten Kitchen's beautiful pictures of Buckeyes lured me in in an new trap: chocolate coverd peanut butter balls.

In what universe does that NOT capture everyone's every single waking moment of thought?

I should never have, never ever have gone to that page twice. The more I read it, the easier it seemed to accomplish.

Unfortunately, seeing them disappear is wreaking a havoc on my guilt system.

I present to you, the evil Buckeyes: 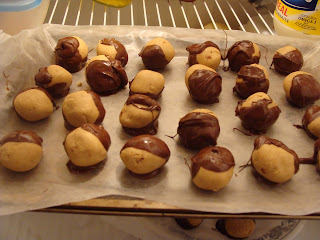 Yes, I'm perfectly aware they look a little...weird. I'm not good at dipping stuff, and who the hell cares when it's PEANUT freakin' BUTTER and CHOCOLATE?

You can find the recipe here, but beware and enter Smitten Kitchen at your own risk! 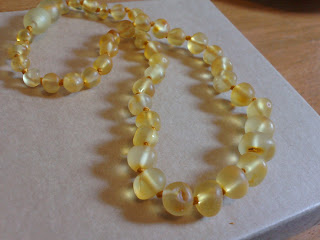 This is the first thing we've bought for ChickPea yet! We're luckily covered for clothes (lots of gender neutral clothes that I never used for Monster because they were too....yellow or green, will finally come in handy). We're also good with newborn toys, cloth diapers and socks. Since there wasn't much to buy this time, I splurged on this amber necklace from Inspired by Finn.

These necklaces allegedly help with teething, colic and general discomforts of newborn babies. I'm eager to try and see if they really do make a difference. I'll be especially interested in how it affect the baby in the 6th month sporadic sleep period, during which Wizard and I had official joined the league of zombies when Monster was teething.
Posted by Ayesha at 8:19 AM 2 comments:

It's a typical Karachi winter night with just a slight chill in the air and the lights go out. The neighborhood is dipped in darkness during another power loadshedding planned by the city. At this time, another far away part of the city is washed in lights after their own few hours spent without power.

This is the time the neighborhood buzzes the most. The TV sets are off, the kids cannot do their homework anymore and the best thing to do is to hang out in the gardens, courtyards or verandahs of the houses. Each family probably has the same impromptu set up as we did in our home: chairs and tea tables are brought out and set up in a circle. The parents chat with each other and with the older children, while the younger kids run around in and out of the homes finding their pals in the dark.

This one of the fondest memories I have treasured from my home in Karachi, Pakistan. Long before the terrorism started, we'd never heard of shoot outs and the only gun I'd ever seen was a BB gun that we shot the feral rats with. Late into the night, or early hours of the morning depending on whether it was a weeknight or not, the children would run without fear as far as several blocks away from homebase.

If there was one thing that was successful in collecting all the AWOL children, it was the mong-phali waala, the peanut-seller. In pitch darkness, we'd hear his copper bell chiming, as he'd roll a rickity rectangular rairi , a largish flat bed cart, piled high with roasting peanuts and myriad sweets into the street.

Long before you hear the bell chiming, a few seconds before you can see the halo of lantern light near the corner at the end of the street, you can smell the fresh roasting peanuts. Our sudden calls to Abbu, Baba, Daddy, Ammi, Mom or mama for money are drowned by the mong-phali waala's now loudly chiming bell.

The women shout out their own requests "Aik rupay ki revri bhi lena!" "Mere liye chilli hui mong-phali!" as we sprint to the mong-phali waala, trying to get there before others and beat the crowd. Washed by the yellow light of the lantern, warmed by the slow roaster sitting on the rairi, you see all your pals waving money and being rewarded with steaming packets of peanuts, roasted corn or digging in immediately in the cones of candy being handed out. One of them, my favorite and that is all I'm here for. Gijjik! I may mix it with my sister's shelled peanuts order, and I know she won't want any of my Gijjik. Most of it ends up on the eater's clothes and hands, so kids are usually the only ones who truly appreciate the fluffy, flossy goodness.

Years later, having married into a new culture, I am pleasantly taken back to my childhood whenever I see Pismaniye, or Pashmak as the Iranians call it. A desi version of cotton candy, before machines started spinning colored bits of sugar into a cloud, we had Gijjik. Pulled sugar, often spikey where the sugar strands crystallized too much, was still a pleasure to pull with your fingers and carefully place in the mouth trying not to lose the powdery bits too much.

Pismaniye is the grown-up version of Gijjik! Sprinkled with pistachio powder, the pulled sugar is softer and finer than I remember. It's a light delicate taste that melts in your mouth almost as soon as it appears. Also known as Dragon's Beard to the Chinese, it is perhaps one of the most tangible, most available treasure keeper of memories most fond to me.

I've been having pismaniye on special occassions when we find it in a store and I wrote this for my friends and family to understand where my obsession for this otherwise ordinary sweet comes from. Those nights are special to me, as they preceeded all that happened in my life after: moving to a new neighborhood, losing my friends, growing up in a household rife with financial troubles and me a 12 year old suddenly realizing that I can understand what not having enough money means! Onwards to losing my father, losing so many loved ones as I am moved to a different city....on and on...and on goes my life.
Even in the darkest times in my life to come, dark nights like this, of running with friends and shelling roasted peanuts on an utterly dark night, always shined the brightest in my memories, and I was able to escape in my mind to that innocent oblivion. So when I keep talking about pismaniye, I hope my friends now know, what I'm really talking about in between my lines.
Posted by Ayesha at 1:33 PM No comments: