Your weapon of choice? 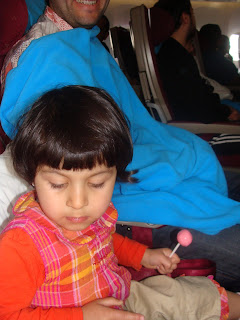 It all started with a missed nap. The plan was to make sure Monster sleeps for at least 2 hours BEFORE going to the airport. The little twister was up and kicking when we finally located the designated gates to our plane.
Enter Weapon #1: Toddler Carrier. Use: Restraining and forcing toddler to calm down. Success rating: 100%. 10 minutes after strapping her on my back and letting her watch ground staff load baggage, she was out cold.
She was sleeping for a mere 45 minutes when boarding started and the Monster on my back began stirring. I make her run/walk/jog back and forth the waiting area and restrooms a few times before finally letting her follow her dad to our seats. We were expected at least 45 minutes of waiting in line for take off.
Enter Weapon #2: Buggle gum flavored lollipop. Use: Preoccupy toddler while ensuring a good swallowing pattern going for popping ears during take-off. Success rate: So-so (had to clean lollipop several times as Monster experimented with its sticking quality).
Then there was the time before lights out when the nerves kicked in and she wanted to catapult herself over seat backs.
Enter Weapon #3: DVD player and milk. Use: calm toddler into a state of minimal activity so they can slowly drift into dreamland. Success rate: 100%. Soon after she whined and slammed Caillou shut, rolled over as much as she could in the crammed seat and dozed off for the next 5 hours.
*Sigh* Bliss (which I utilized to read Shutter Island cover to cover...not a bad use of time!)
Posted by Ayesha at 2:07 PM