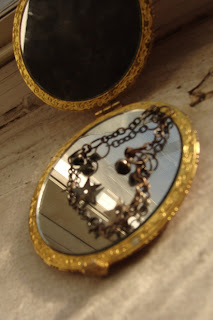 to make new hijab pins. I found the above bracelet. At first I admit, I kinda looked at it wondering if it's a piece of the original bracelet, it looked so tiny and fragil. Both the clasp pieces were intact so I tried it on. It fit! Looking at it chiming on my wrist, I finally remembered where it was from.

It's from either 2001 or '02. I tagged along my brother's friend and their team of Pearl Continent of Lahore's PR, Accountants and General Managers, and went for a day trip to Murree in Northern Pakistan. We left early in the morning and after hours of chatting and introductions, I already felt like I was among old friends. They were all much older than me and were teasing me like they would a child. I was used to the teasing and chiding being the youngest in my family as well and played along.

In Murree we went shopping, sight seeing, eating the crappy fried food from the side streets and were totally happy. We threw snow balls at each other and sat on the meagre accumulated snow to take pictures really close up, so it looked like we were surrounded by mounds and mound of snow. Some of us had never seen snow before that day.

On Mall Road, there was plenty of shopping to be done, and I really liked this bracelet that another girl from our group was going to buy. I asked her if it was ok with her that I bought the same thing. I figured, it's not like we're going to be in each other's company all the time, it should be ok if we both wore the same thing. I bought the bracelet while she was still looking through other things and walked out. Later, I saw the same girl walking miserably around behind us. I asked someone what was going on and found out that she was upset that I bought the bracelet. I specifically remembered there being like 5 more of the same bracelet. I almost began to feel sorry that I'd bought it, but quickly pushed the thought out: I was in the company of adults, I told myself. If they want to act like teenagers, let them. It's there loss.

I've often applied the same logic to many different incidents and am realizing now, that buying that bracelet and holding on to it may have been the beginning of a new me. It was around the same year that I stopped stooping to other people's standards just to be accepted, bending over backwards to show that I belonged even when I really knew I didn't. Those were the times I began to stand up for myself.

Although I may have forgotten why year after year, move after move, I've somehow held on to this tiny little keepsake. I'm thinking maybe it's fate keeping it in my hands even though I seem to lose anything under 3lbs in weight almost magically.

So Fate, thank you for the reminder. And hello, Bracelet!