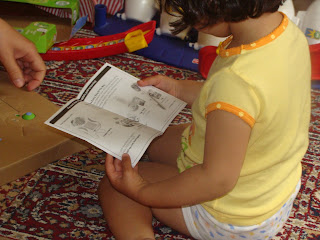 My Monster confirmed today that she gets the more intelligent genes from me, by reading the manual to one of her gifts while Baba struggled with trying to find out how it turns on with opening it.


There is something everyone who knows me can vouch for: I will always read the manual. In this, Mr. Oz and I are the opposites; he'll sign any piece of paper after pretending to look over it but he's actually only placing where to put his signature. Me? I'll INHALE the thing!

I never open/put together/turn on anything without going through the manual first. I read both Mazda's and Subaru's manuals in detail while Mr. Oz dove right in and learned where everything was whenever he needed them. The disadvantage: He'd be looking all over the car for an easier-to-reach cigarette lighter for his phone/GPS/random item frantically WHILE driving and I'll smirkingly flip a hidden latch and reveal the lighter... RIGHT UNDER HIS NOSE. Or, he'd be hitting the PRE button on the stereo each time the song ends so he can listen to it again and after the 6th time I'll press a button that would turn out AUTO RPT and he'd be like "Wow, I've been driving this car for one and a half years and I didn't know there was a repeat button."

Dude, next time read the manual.
Posted by Ayesha at 8:05 AM