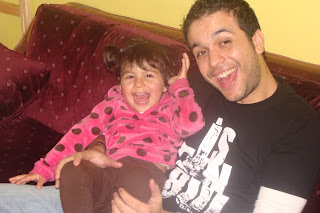 Her new Favorite Uncle
Caner came to visit and Little Miss Ozturk was truly in love, as was Uncle Caner!
We also caught the tail end of the Macy's Thanksgiving Parade and managed to take a few cell phone snapshots of Iza's surprised face. It's priceless, and currently being held hostage by the new phone. I'll have to install the Samsung drivers the first chance I get and then I want to update today's post to include pictures from the parade.
Now to sleep; have a big breakfast tomorrow followed by a possibly even bigger dinner party at my brother's place!
Posted by Ayesha at 10:23 PM