Why does he know me so well?

First of all, I know the dates are out of order, but I also have a Monster screaming under the computer table yanking at the wires, so I'm posting as I can get at 'em.

So on the morning after the big storm, I woke up way early than should be considered normal, and had a stupid idea in my head to go to gym. I didn't think I'd be stupid enough to actually act on it. It wasn't so bad and on my way back I had another bright idea upon seeing Mr. Ozturk's snowed in baby Subi.

At home, all I said to Mr. Ozturk was "some kids were jumping on the cars with their sleds" and he goes,

"Did you make footprints on the car with your sneakers?" And I hadn't even shown him the picture yet. 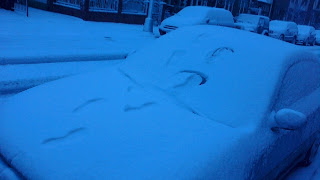 We need some time away from each other, just so I can jump him with surprises.